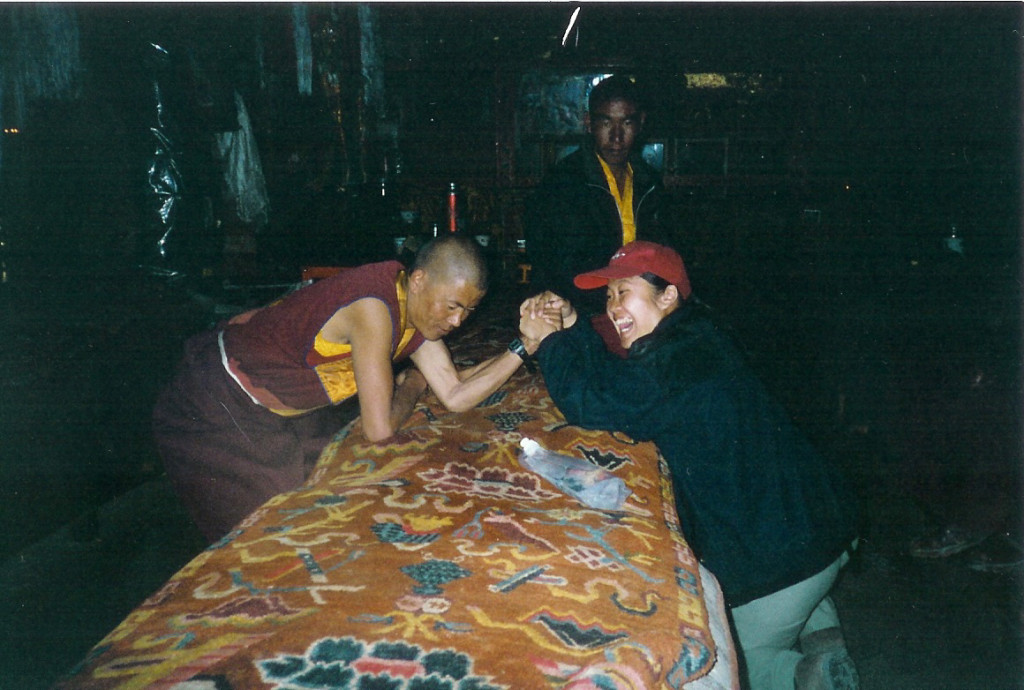 Who won this arm-wrestling match?

I came across this old photo and a flood of memories came back:  I was  arm-wrestling with a Tibetan monk at a Buddhist monastery just outside of Lhasa.  What started off as a joke turned into a serious arm-wrestling match.  And when I lost (even after using both arms), I had to down a cup of yak butter tea, which was a strange concoction of bitter tea with a thick film of yak butter on top.  Not too tasty.  But I was glad to drink it because all the monks I met were so good-natured and generous.  I found the Tibetans to have a wonderful sense of humor and a positive attitude, despite the hardships they often face.  Moments like these remind me of how the best parts of traveling are not so much the places we see, but the rich and heartfelt experiences we share with the locals. 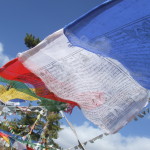 The bus slowed to a halt.  Then it lurched forward and coughed black fumes and stopped again. I was finally in Tibet and yet, our bus had officially died only twenty miles from the airport.  It seemed like we were never going to get to Lhasa.

A few Tibetan men with lit cigarettes dangling from their chapped lips stepped off the bus.  Their jackets were worn and faded by the sun, and lines of thread dangled from the frayed hems of their pants.  They squatted by the side of the road and played cards in the dirt.  The driver pulled tools from a box under his seat and immersed himself from the waist up under the hood, banging and twisting things.

I needed to go to the bathroom and I wasn’t sure about leaving.  The bus could get fixed any minute now.

I peered out the window to find the driver’s legs still sticking out from under the hood.  His friend tossed a part of the engine up and down in the air, higher and higher while his buddies laughed.  Tools were scattered all along the front of the bus and obviously, this was going to be more than just a short stop.  It was already afternoon and night would soon be coming.

Getting off the bus was like trying to walk up a crowded escalator.  Every seat was occupied, with three people crammed into the two-seater seats.  Others, who spilled into the aisles, brought their own wooden stools while carrying bags, live animals and fruit on their lap. I stepped over them and passed torn brown suitcases held together with string. Near the driver’s seat, live chickens, bound by their feet to a shabby straw basket, squawked.

When I stepped out, the sun’s intense rays glared down on me, cooking my black hair so my head was hot to the touch.  It did not really occur to me before that being at such a high altitude meant being closer to the sun.

The dirt road stretched out as far as I could see, and as I walked, I admired how smooth and bare the landscape was.  The sky was a brilliant deep blue, the kind of purity in color that I first discovered in my kindergarten paint set before learning of other shades like baby blue and peacock navy.

There were no houses, animals or people in sight.  The bus was a tiny speck at the bottom of the road and up ahead was just a straight line.  However, when I passed a bend in the road, I discovered a small wooden shack. I made a bee-line to it, each step of the way as excruciating as the next.  My bladder was going to burst.  A small outhouse was just off to the side.  It was a tiny concrete box with no doors and two holes in the ground divided by a waist-high wooden partition.  I ran in.  Relief.

With my pants still wrapped around my ankles, I hobbled out into the daylight; I couldn’t bear the stench any longer, and my eyes were starting to water.  As I bent over to pull up my pants, I heard a gasp from behind me.  I whipped around and tried to cover myself with my hands, but it was too late.

I had just mooned my first Tibetan.

She was a short but sturdy woman in her 30s with a full balloon-like dirt-brown skirt and a cream colored shirt.  Beautiful turquoise beads speckled her thick black locks. She carried a homemade broom made out of straw in her hand and a plastic dustpan in the other.

She eyed me up and down without any expression on her face.  And then  she repeatedly pointed towards her emaciated vegetables and then again at her outhouse.  Her face displayed not a hint of animosity but more curiosity with a slight tinge of fear in her eyes.  Her mouth was reduced to a tiny red dot below her nose.  Maybe she didn’t know how to take me since I was a foreigner but I looked Chinese.

I finally extended my hand out, but she didn’t shake it.  Remembering something I read in my guidebook, I clasped my hands together and bowed my head, the traditional gesture to greet a Tibetan, especially when entering a temple or someone’s home.

Then she smiled, showing her little brown stubs of teeth.  We laughed nervously, and I pulled out a bag of peanuts from the airplane for her.  She pushed it away from me, still maintaining her smile.

We stood there for several minutes grinning and nodding, until finally, I waved goodbye to her and began walking back to the bus.  Down the path, I turned around and she was still at the top of the road, waving away until she looked like a tiny grain blending into the background.

This excerpt is from my book THE SAME SKY – Chapter 4 Sparkler.  For more excerpts, click here. 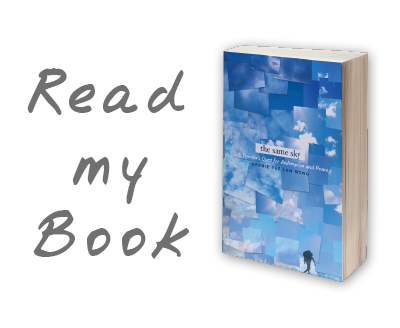